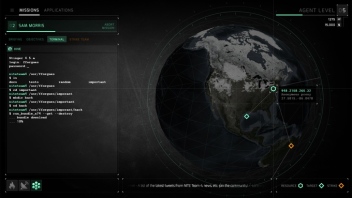 Description: NITE Team 4 is a story-driven military hacking simulation game that explores the world of cyberwarfare and features realistic mission scenarios. It will be released on Steam for PC and Mac.

You play as a new recruit in the covert hacking cell, Network Intelligence & Technical Evaluation (NITE) Team 4. Engaged in cyberwarfare with black hat groups and hostile states, you will be in a struggle to penetrate highly secure targets. Your job is to use the STINGER hacking system to infiltrate hardened computer networks and coordinate strike teams on the ground to carry out missions that feature real espionage tradecraft terminology taken straight from leaked NSA documents.