The following is the transcript of the talk I gave at IndieCade East 2016, part of the Alternate Universe: Design Lessons from the Other Other Indies track.

Create a New Passage: Why I Chose Gamemaking to Tell Stories About Healing 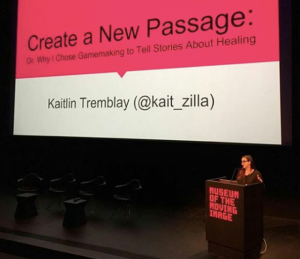 I am a professional editor and writer in Canadian publishing, both fiction and non-fiction. Many of my friends work in publishing. I live and breathe books. Sometimes, my partner will come home to finding me just sitting in front of my bookcase, flipping through my favourite books, reading lines I adore and rereading my own marginalia, scribbled in between—and sometimes over top of—lines of text.

So, needless to say, when I decided to turn a short story I had been working on for a long time into a game, and stop pursuing traditional publishing for my fiction, my friends and family had some questions for me. The most recurrent question was: that’s really cool, but why?

This is something I myself have thought about for quite some time. My dream was always to publish a novel of my own, original fiction. As a kid, I wouldn’t stop writing full-length manuscripts. I still have these “books”—scribbled in pencil in spiral-bound notebooks, with terrible back-cover copy and tables of contents that are just thinly veiled references to how obsessed I was with Dungeons and Dragons and Baldur’s Gate.

I wrote non-stop. Sprawling fan fiction that turned into original fantasy that turned into literary fiction as I entered university, studying in a creative writing fiction program specifically. I submitted stories to every literary magazine I could think of. I got stories published in a few. I was 18 when I received my first cheque for my original fiction. It was amazing. I felt like a professional. In many ways, I suppose I was.

Then I stopped. Things got…hard for me. After the death of a friend, my mom getting diagnosed with cancer, a relationship ending, and a whole ton of other things, the eating disorder that always just lingered at the back of my existence came out in full force. I stopped doing anything that wasn’t studying, drinking, or starving myself. My writing became a source of anxiety, rather than pride. It stopped mattering because as my mental illness took a stronger and stronger hold on me, I stopped believing I was capable of doing anything good.

Fast forward five years. After a few years of relative recovery, I found myself at another major turning point, with both my mental illness and writing. Relapsing hard after finally getting myself out of a long-term abusive relationship, getting my video games criticism writing published more widely and becoming a more active member of the video game community, both in person in Toronto and online through Twitter, I started writing fiction again.

Except it didn’t click the way it did before. Something was missing. It felt dull, lacklustre. I felt lonely—isolated and terrified, writing about how hard it was coming out of a relationship that spent five years gaslighting you and sending you to therapy for a mental illness you didn’t have, while ignoring the mental illness you did have. It felt off. It felt wrong. It felt terrible.

I stopped writing it, even though writing it was the only way I felt like I wasn’t drowning underneath it all, and could gain some semblance of control (control that wasn’t food related, as I was used to doing).

Then one day, a friend said to me: “You should make a game.”

That’s when I realized there was nothing holding me back from making my own game. Hell, I worked in games, I wrote about games. Why not try making my own? So I took my short story that was stalled, and changed it so it could fit into Twine. I broke it up, added in bits where I wanted the players to have an active hand in the self-harm the main character was undergoing, and I got to work.

That game was Stop Me If You’ve Heard This One Before. My first game.

Those comments haven’t stopped coming, not since when I first released it, going on three years now. I’ve made lifelong friends from releasing Stop Me. I’ve become stronger because I made Stop Me.

It was a gamechanger.

Since then, I’ve continued to make games. I’ve released four major games, all made in Twine. All about horror and healing. I haven’t looked back once.

So why do I keep making games about healing now? Now that it’s out of my system? Now that I’m better? Because making games showed me something important: games are better for me to talk about healing, and that’s for three main reasons. Those reasons are: community, accessibility, and confidence.

The first thing I want to talk about is confidence.

In publishing and literary circles, there is a certain level of elitism and disdain found toward self-publishing personal works. Look, I love publishing, and sites like Wattpad are helping create a more gentle attitude about self-publishing.

But the fact remains: there is a lot of disdain toward self-publishing. And I think that’s because in traditional book publishing, there is a lot of pride in being published. In being found. In being selected. This pride is based on an understandable sentiment: someone else thinks my work is good.

But literature and publishing houses also act as curators of taste and style. What gets chosen becomes part of their curation. Being published by a traditional publisher validates the work an author does because it says, “Hey, we think your stuff stands out from the rest and deserves to be promoted.”

And that’s awesome. A lot of great, amazing, and talented writers find success this way. They can make change this way.

But let’s not delude ourselves: a lot get left out. Get left behind the gates of traditional publishing. There are a lot of barriers to access, which I will talk about more in my second point, that limits who can even be considered for traditional publication.

So people turn to self-pubbing. Which is great! It lets people tell their own stories! It allows for more stories! But people turn their back on this.

This kind of elitism and disdain toward self-publishing personal works is practically non-existent in indie gamemaking. In fact, it’s encouraged. It’s celebrated. Look at games like Cibele, Depression Quest. These are all personal games made by author, under their own jurisdiction, power. And they’re celebrated. Look at all the Twine games that touch people and connect people. They’re all self-published.

This allows for a greater confidence in making self-published works. This kind of confidence allows people who don’t have access to agents, publishing houses, and editors the chance to write and tell their story, how they want to, and to as a way of connecting with other people.

This brings us to my next point: accessibility.

Beyond just breeding greater confidence and allowing more voices to be heard, games—especially when making a personal game in something like Twine—allows for freedom of content. I can tell my story exactly how I want it to be told.

But there’s more than just creative freedom. Programs like Twine make telling stories super accessible because you don’t have to go through the channels of marketability, profit and loss statements, and general market viability to even be considered for publication. Acquisitions is a tough process that tends to lean very heavily on the market—and market trends—and that often means people’s stories get cut out, simply because they don’t fit the bigger picture of the market.

But we’re not all perfect examples of a marketable storyteller. We don’t all have massive Twitter platforms, and sometimes our stories don’t fit market trends—either by being too “common” or not being “common” enough. But they’re still our stories. And if we want to tell them, then we should.

So Twine, and gamemaking, is an easily accessible way for people to tell and distribute their own stories. Anybody can do it, which means some of the most diverse and incredible works come from Twine and alternative and indie gamemaking. Twine is free. Twine doesn’t need programming. And it can be hosted for free. It’s there, and there is a huge community surrounding it, who are tender and kind and want to play your game, and hear your story, in absolute earnest. It’s remarkable.

And this, this is the best part of why I chose gamemaking as part of my process of healing.

It’s the community that comes with it. On a strict, non-emotional level, the community in games is a potentially HUGE area of distribution that is free to use. You can upload twines to Philome.la and any game to Itch.io, both which come with their own internal discovery mechanism. This distribution isn’t hindered by needing bookstores or over-saturated digital marketplaces that are hard to navigate, and often result in books becoming buried under more famous titles and placement into ill-fitting categories.

This greater area of distribution also allows for access to the emotional part of building a community. As I mentioned earlier, some of the most amazing support and friendships I’ve received and have built come from this very community.

I wouldn’t be here—physically, mentally, and emotionally—without that community. Without you all. And I wouldn’t have this community if I went the traditional publishing route. This was only possible in games.